In welterweight action, Michael Lombardo (11-2) picked up a very workmanlike decision over a larger Korey Kuppe (8-4), though it lacked much in terms of highlight-reel moments.

Working from his back, Kuppe utilized a rubber guard to slow things down, though he eventually released his leg, and Lombardo instantly starting looking for punches and elbows from the dominant position. Eventually, Lombardo elected, perhaps surprisingly to go back to the feet. It nearly cost him the fight, as he got caught in a standing guillotine that could have easily earned a tap, though the round came to an end as Kuppe transitioned to the floor to gain leverage.

Lombardo worked to a clinch quickly in the second, slipping around to the back and trying to kick Kuppe’s legs out from underneath him. Kuppe stayed upright, but he also wasn’t especially aggressive in trying to get free. The complacency cost him, and Lombardo was able to eventually get the fight to the floor.

Once on the ground, Lombardo was unable to much from the top, with Kuppe very active underneath in terms of looking to strike and also teasing potential submissions. Lombardo did sneak a few nasty elbows, though, and he finished the round on top.

Lombardo wasted no time moving inside to start the third, immediately getting into the clinch and then dragging the fight back to the canvas in the opening minute. From there, Lombardo was happy to grind away from the top, working in punches and elbows when possible but clearly focused on remaining in the dominant position.

For his part, Kuppe tried to get his feet on the hips and create space and also did punch a bit from his back. However, he waited until the final minute to crawl back to his feet, and he wasn’t able to get free. Instead, Lombardo drove him back to the canvas with a powerful takedown and finished the round on top. Kuppe tried for a triangle in the closing seconds, but it wasn’t there, and Lombardo walked away with the win, 29-28 on all three cards.

Michael “The Don” Lombardo takes the W in this bout.

Wolf flicked her jab out early and often, looking to pack the right hand behind it. Meanwhile, Tennant tried to stay mobile and mix low kicks in her attacks. Wolf was confident and aggressive in the pocket, and she staggered Tennant a bit in the early going but didn’t get too aggressive while likely expecting a takedown attempt to come her way.

Tennant did eventually force her way into a clinch, but Wolf framed and separated rather easily to reset in the center. She defending a more earnest takedown attempt shortly after, as well.

Wolf’s boxing was crisp to start the second, though Tennant certainly wasn’t hesitant to engage, and she again pressed her way into a clinch. However, Wolf simply muscled her way out of the position each time.

Wolf needed a brief break after suffering an inadvertent eyepoke, but she went right back on the attack on the restart. Wolf was able to trip Tennant to the floor after catching a kick but declined to follow. Despite being a pure striker, it might have been a mistake, because Wolf was tagged by a few right hands that seemed to stagger her just a bit. Tennant swarmed at the opportunity, letting punches fly before moving into the clinch, where the round ended.

Wolf started quickly again in the third, but an early eyepoke drew an audible scream from Wolf. Referee Mark Smith brought in the doctor take a look at Tennant’s right eye, which seemed to have some sort of abrasion underneath it, but the fight continued.

Wolf was incredibly aggressive on the restart, and Tennant countered with a clinch but couldn’t get her opponent off-balance. Wolf’s right hand found the mark repeatedly when they separated, but Tennant walked forward and again got deep on a clinch before switching to a single. Wolf surprised by grabbing a guillotine and falling to guard. The choke looked tight, but Tennant refused to tap, tripodding up and trying to drive her shoulder forward.

Tennant eventually was able to work past the guard and into side control, forcing Wolf to let go of the neck. Tennant then stood up and kicks the legs a bit, avoiding upkicks as she tried to again establish the dominant position. The final round ended with Wolf on her back, but she had done enough to take home a decision win, 29-28 on all three cards.

Not bad for her MMA debut 💢

Does @DanyelleWolf deserve a contract?

In the night’s first contest, featherweight Kyle Driscoll (12-3) banked the first two rounds against Dinis Paiva (13-8) and then survived a late charge to take home a decision win.

Paiva landed a big right hand early in the contest, sending Driscoll briefly to the canvas. He stood back up quickly, and after a bit more of a feeling out on the feet, Driscoll shot forward for a takedown, though he couldn’t get the fight to the floor. A second effort shortly after did get the action to the canvas, slipping around to the back when Paiva scrambled back to his feet. Paiva was patient, though, and eventually worked his way free, and they played out the remainder of the round on the feet.

The pace remained steady on the feet to open the second. Driscoll was the aggressor, and he occasionally looked unsuccessfully for a takedown. Paiva was solid in defense, but he also wasn’t able to mount much in the way of counters.

That changed in the third, when Paiva came alive on the feet. Driscoll seemed to slow just a bit, and Paiva found a home for a big left hand. Driscoll tried to turn to his wrestling, but Paiva hit a slick switch and was able to push down to top position.

Driscoll worked from an open guard, briefly teasing an armbar on a couple of occasions and then sweeping to the dominant spot late in the frame. Paiva reversed the favor in the final seconds, but it was too little, too late, and Driscoll walked away with a decision win, 29-28 on all three cards. 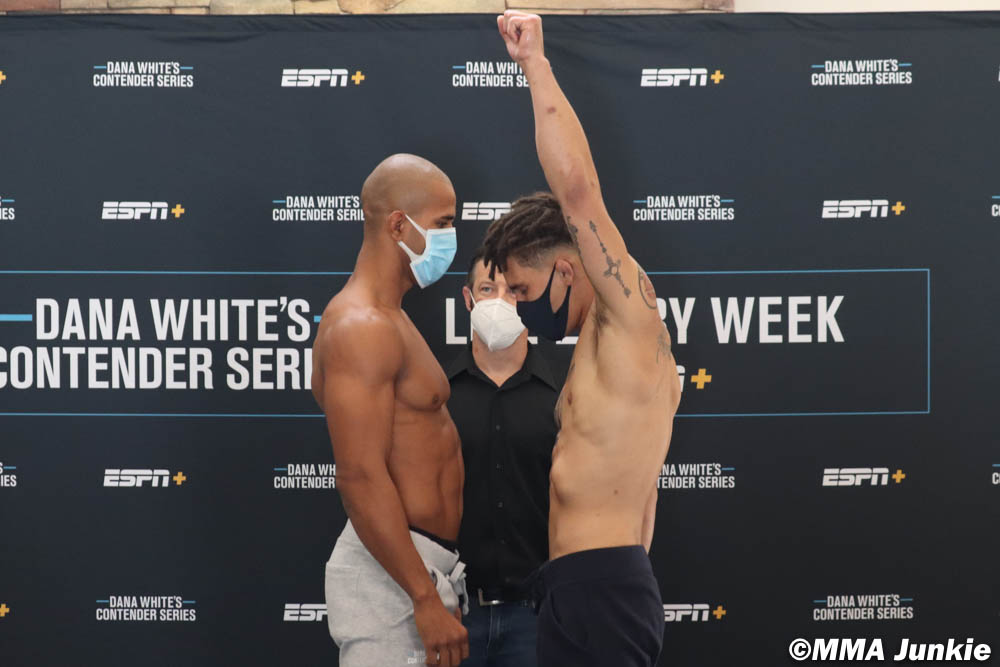 Alisson shows why Liverpool rushed him back from injury against Arsenal...