Sports Hitt
Home Tennis The Mystery Of Gael Monfils: ‘You Never Know How & What I...


Editor’s Note: ATPTour.com is resurfacing features to bring fans closer to their favourite players during the current suspension in tournament play. This story was originally published on 4 September 2019.

On the first Thursday of the 2019 US Open, Gael Monfils played the final match of the day on Court 17. On the scoreboard, the Frenchman beat Romanian Marius Copil 6-3, 6-2, 6-2 in the second round. But nobody will forget the way the eight-time ATP Tour titlist punctuated his victory. After hitting a well-placed serve, Copil was only able to scrape back a high ball that landed inside the service box.

Monfils’ response? A 360-degree overhead smash, doing a complete turn in the air before slamming the ball away. The 33-year-old lost his balance as he fell down to the court, rolling onto his back with a big smile on his face. Even Copil cracked a smile before embracing the Frenchman.

“I didn’t get offended. It was match point, it was an easy ball, close to the net. So if you have a chance to go for something crazy, why not?” Copil said. “Look how many people talked about it.”

When Monfils walks onto the tennis court, fans in the stands and around the world are treated to something more than a match. It’s also an experience. It’s something people talk about. The World No. 13’s combination of talent, pure athleticism and embracing the atmosphere makes him one of the most entertaining players in the sport. 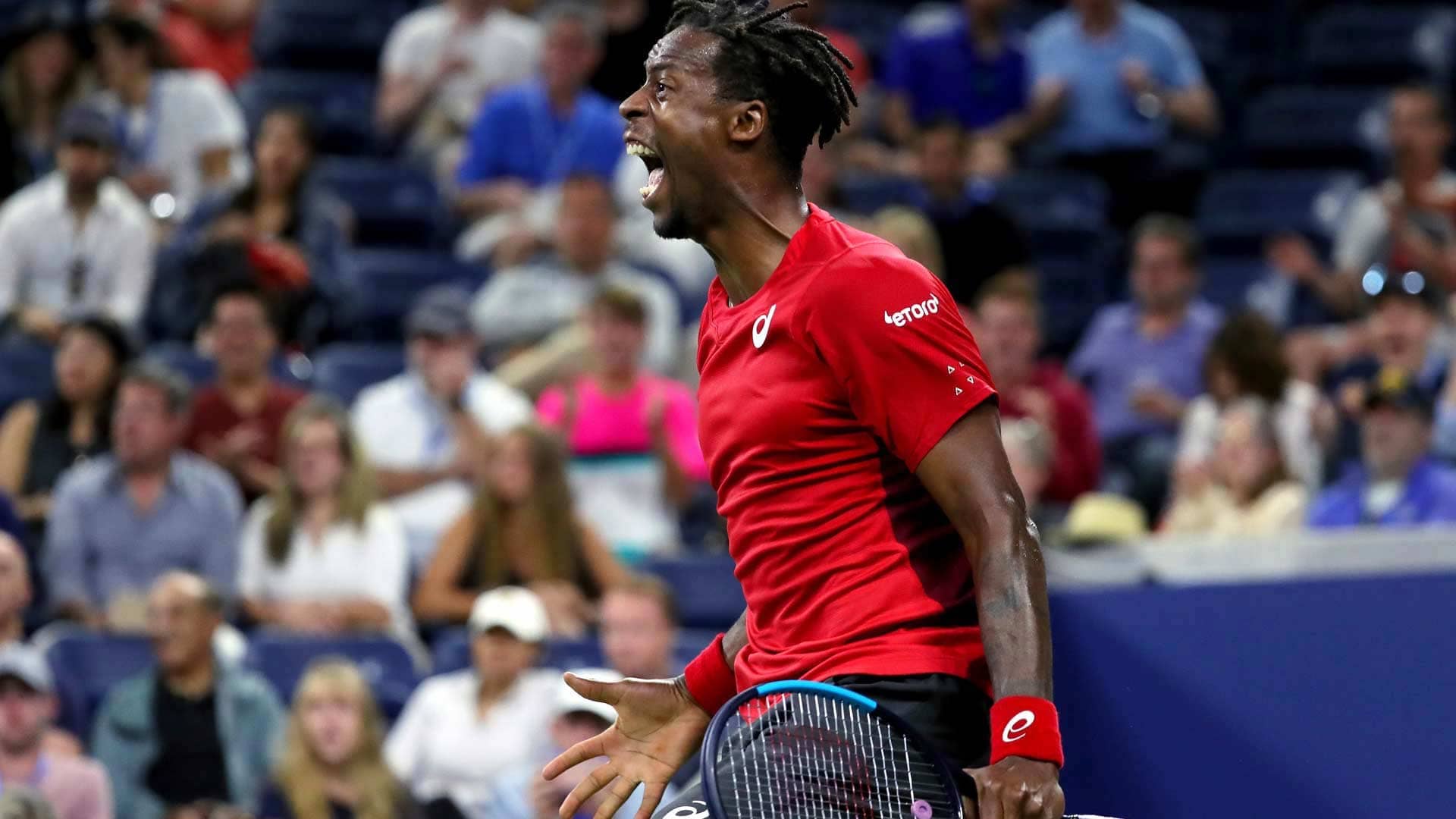 What people may not know is that Monfils did not grow up glued to his television set dreaming of emulating a certain tennis player whom he was watching. The Frenchman actually didn’t watch tennis, but basketball.

“I used to definitely like [Allen] Iverson when he was young, Michael Jordan, Dennis Rodman. Those guys, it was fun for me,” Monfils said. “I couldn’t understand what they said because I couldn’t speak English. My parents either. But just to see them doing what they were doing was great. That was cool.”

But now, Monfils loves tennis. Not only is he a fan of the sport, but he simply enjoys being out there. Some people may characterise Monfils as a performer — and he certainly entertains — but the Frenchman is just doing what is fun for him.

“Sometime haters would say or misunderstand how lucky I am to doing what I’m doing, to be healthy and play my sport and passion. For me, tennis is a sport, yeah, some people would say my job. It’s my job, yes, but it’s a sport. It’s my passion,” Monfils said. “I can play with kids for hours. Playing Grand Slams for me is just a passion. When I’m on the court, it’s a blessing.”

At the Coupe Rogers in Montreal last month, Monfils was playing Ilya Ivashka on an outside court as home favourites Felix Auger-Aliassime and Milos Raonic battled on Court Central. You might have expected fans to focus on their Canadian hopefuls — which they did — but Monfils’ court was packed, and the Frenchman thrived off that energy, pumping himself up and visibly enjoying the atmosphere, even if it wasn’t the biggest court he’d competed on.

“It’s an unbelievable feeling… it’s sometimes great to play [on a] smaller court, with the crowd very close. We can feel their energy, the passion, the love in it,” Monfils told ATPTour.com in Montreal. “I love it, to be honest. It’s great.”

Monfils began working with a new coach, Liam Smith, this season. Smith had known the Frenchman from when he was a star junior, and had also gotten to know him during practices with his former charges in Miami. And he loves to see that enthusiasm from his player.

“It’s fantastic. He loves the sport. He loves to play, to compete. He loves the big stages and he has fun on the court. I think that’s something that’s always good for young players to see,” Smith told ATPTour.com. “One piece of advice that Gael will often give to juniors is, ‘Don’t take everything too seriously. Enjoy to play the game. Enjoy to play matches, to compete.’ He’s great for the sport of tennis because he engages the crowd, he has a lot of respect for his opponent and treats everybody really nicely.”

Not everything ended well in Montreal, though. After playing great tennis to reach the quarter-finals, Monfils battled past an in-form Roberto Bautista Agut. His semi-final against Rafael Nadal was scheduled the same day due to rain the day before, but Monfils withdrew due to an ankle injury.

That injury dated back to well before that ATP Masters 1000 tournament in Canada. A few days before his first-round match at Wimbledon, Smith says Monfils had a “very nasty” ankle twist. Initial scans showed it would heal reasonably quickly, and Monfils played his match against countryman Ugo Humbert. But after letting slip a two-set lead, he retired in the fifth set due to the injury.

Monfils’ training schedule entering the North American hard-court swing was cut short, and new scans showed things that had not come up before, meaning he needed more rest. So arriving in Montreal, there was already an injury risk as the tournament wore on.

“To come out and play Rafa an hour and a half, two hours later, was not really a realistic thing for him. Obviously with the potential injury risk and interestingly enough in the second set with Bautista Agut, he ran into the corner and just tweaked a little bit that same ankle. So with him, his medical team and myself, we decided that it was better to unfortunately skip that one, which was a shame because we would have liked to have played that match,” Smith said. “I would say it worked out well if we’re still here on Sunday, but in terms of how his body is now compared to how it was after that quarter-final in Montreal, yes, it’s worked out well.”

Although Monfils lost in the first round of the Western & Southern Open after a quick turnaround, the Frenchman has found his footing here in New York, earning three of his four victories in straight sets, with the other being a thrilling five-set triumph against #NextGenATP Canadian Denis Shapovalov.

Instead of suffering a letdown after that, Monfils wasted no time in dismissing the gritty Spaniard Pablo Andujar with the loss of just five games.

“Yesterday was great. His focus, his movement, his ball-striking quality and his ability to stick to the plan that we laid out from the beginning was exceptional. When Gael plays that well, it takes a very, very good player to beat him. There are not many that can,” Smith said. “Pablo is a very good player and has a great attitude and fought really hard, but Gael played such a good match and consistently played every point with a high intensity. It’s very tough for any player to deal with that. When Gael plays with that level of composure and focus and intensity, he’s very tough to beat and he has a chance against anybody in the world.”

Monfils will look to keep it going against rising Italian Matteo Berrettini on Wednesday on Arthur Ashe Stadium. Not only is it the biggest tennis stadium in the world, but it is also named after his idol. Monfils lives for these moments. It’s a chance to thrill thousands in person and millions across the world, with a spot in his second US Open semi-final on the line.

“You practise for that. You always dream to play in the Slam… big stadium. That’s why we play tennis for,” Monfils said. “That’s why I think it also brings the best out of me.”

Knicks In Very Good Position To Trade For ‘Disgruntled’ Star, Per ‘SNY’

Dodgers: Justin Turner Returns to the Lineup After Hamstring Scare